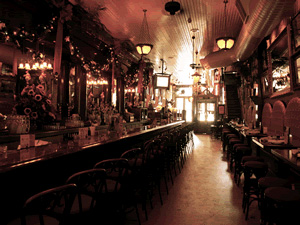 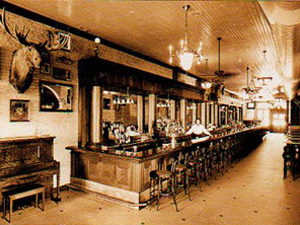 The present Buck Bradley's Saloon & Eatery; one of the oldest buildings on Old World Third Street began as a humble one story furniture store called Pioneer Furniture Store - built in 1854 by a German immigrant, Adolph Schoenleber and his wife, Margaretha. The original structure consisted of the front half of what we now call the bar room and the space directly under the front half of the bar, the basement. As you can see, this establishment has undergone a great amount of renovation since those early days.

Adolph and his family were responsible for numerous additions and renovations over the years.As far as we know, the second floor of the front half of the bar area was added shortly after the original construction (between 1854 and 1858). This area housed the Schoenleber family. In 1858 a third addition was made to the building, treating the north half of the building and its corresponding second floor. Today this area would be the back half of the bar room, the kitchen area, the formal dining area and the second floor above these areas.

In 1882, a fourth and final addition was made making the front half of the building three floors - Buck Bradley's as it exists today. As Adolph's furniture business flourished so did his family. Otto was born to Adolph and Margaretha in 1858. As most children did in the 19th century, and now do again as the Paget's demonstrate, Otto followed in his father's footsteps by working in, and later running the furniture store. In 1887 Adolph died leaving his store to his son. Business increased and Otto was able to expand his enterprise by purchasing a building down the street (the corner of 5th and Highland) which specialized in office furniture. Otto named the store the "Otto desk Co." The "Otto Desk Co." was open until 1894 when Otto decided to close his store and try his hand at a new business - Chocolate.

The Ambrosia Chocolate Company was founded and Otto continued to contribute to his community by having a strong impact on the shaping/construction of the "industrial exhibit building" or what we call today, the Auditorium and numerous other neighborhood businesses and establishments. He was one of the key founders of the West Side Bank, built two blocks north of Buck Bradley's and participated in many civic organizations, religious groups and numerous neighborhood committees. Otto was successful to say the least, and by the time his Ambrosia Chocolate Company was celebrating their first twenty years, Otto could rest easy in his posh 10th Street home (presently Milwaukee County Courthouse) knowing that his sweets and chocolates were bring eaten across the United States and abroad. In 1903 fire damaged the Pioneer Furniture Store.

After rebuilding, the structure was sold to Mickel & Pritzele to beused as a hardware store. In 1915 the north half of the building was converted to a shoe store. The shoe store lasted until the Great Depression when Millitzer's bakery moved into the northern half of the building. They vacated in 1938. Through the next five decades many other retail businesses occupied the space selling everything from tuxedos, appliances, locks, to fragrant oils. From approximately 1987, Buck Bradley’s respectively named after Otto's great, great grandson, Balthazor Schoenleber Bradley, remained primarily vacant until Bernard Paget purchased it in 1992.

From 1992 to January of 1995 Bernie Sr. and his sons, Bernie Jr., Dan & Wally worked diligently to turn it into a magnificent replica of an 1890 pub & eatery. Buck Bradley's features the largest bar in the state of Wisconsin. The bar top is made of rose colored granite and the authentic cherry wood bar & back bar were specially designed for Buck Bradley's. It was brought in pieces from three surrounding states and assembled once in the building. All of the ornate wrought iron chandeliers and fixtures have been authenticated, as well as the cream city bricks and the tile floor. All of the alterations and renovations take some scrutiny to discover, but try if you'd like. In addition to the first floor, the second floor accommodates the sports fan. Located on the northern half of our second floor, the sports bar has two pool tables, numerous dart boards and large TV's to view your favorite Wisconsin team/event. Our second floor also includes three parlor (banquet) rooms that can accommodate groups of 30 - 350. Rumor has it that Balthazor Schoenleber Bradley, affectionately referred to by his friends as "Buck", Otto's great, great grandson, decided to return to his roots and purchase the building, we've been told sometime between the years of 1938 -1992 (the last two dates of record). We have no written record to prove this, however in honor of his respect for "the family", we call our family run business: Buck Bradley's.